On Thursday, September 30, 2021, at a “Collider Event,” from 2:00-4:00 PM, at the Wright Brothers Institute, Cornerstone Research Group will be sharing their success story and strategies and helping other small businesses interested in succeeding in the SBIR (small business innovative research) contract process.

CRG is a nationally recognized technology leader in the aerospace and defense field. One of CRG’s greatest accolades is being Ohio’s #1 SBIR awardee – no other company in Ohio has won more SBIRs. CRG is willing and excited to speak about their pathways to success.

At the Sept. 30 event, CRG will be sharing their overall strategy and lessons learned throughout their history. Their Venture Studio leadership team will share insights on the topics below and more.

Read more and register for the talk here. 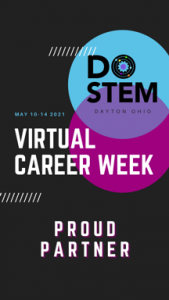 This career exploration event allowed over 2,000 students from across the region to explore virtual exhibits and attend live Career Talks with professional partners from a variety of STEM industries. These valuable career connections showed  students just how many incredible future opportunities are available right in their backyard!

Dubbed CrayTac, this device allows troops to write messages or draw complex figures on walls, sidewalks and other surfaces. The markings are invisible except to someone wearing night-vision goggles. Troops can use CrayTac to mark vehicles and other equipment so they can be identified in low- or no-light situations. It also can be used in place of a glow stick to mark a room as cleared.

In 2019, the Air Force SBIR program awarded a Phase II contract for this project. The funding has allowed Battle Sight and CRG to progress from making CrayTacs by hand to developing the ability to produce hundreds in an hour.

The FAA is coming out with new rules requiring that drones have no exposed rotating parts — good news for Lectratek’s ducted fan propulsion systems. The final rules will be released in January.

Under the Operation of Small Unmanned Aircraft Systems Over People rules, drones will be required to have no exposed rotating parts that could potentially lacerate human skin. For example, if the propellers that provide lift and thrust for the small unmanned aircraft are internal to the unmanned aircraft, such as in a ducted fan configuration, and are incapable of making contact with a person as a result of an impact, then the parts would not be exposed, and the aircraft would satisfy this proposed requirement.

Lectratek is poised to provide the suitable propulsion systems as well as lightweight batteries required for electric flight.

Launch Dayton, Dayton’s on-line startup community of entrepreneurial “ecosystem builders,” announced the top 10 startups to watch in 2021. Lectratek was listed among them.

“Lectratek LLC is looking to power the world’s first flying cars. The startup is focused on powering eAviation technologies for an industry poised for dramatic growth in the coming years. A spinout of private aerospace and defense firm Cornerstone Research Group, Lectratek leverages two decades’ worth of federally sponsored research into electric aviation for applications from commercial and industrial drones to mid-tier commercial airliners. The current team is actively recruiting for executive leadership and business development positions.”   –Launch Dayton
Lectratek’s news article